The room is dark; the click of buttons being pressed fill the room. There are sighs of anguish and yells of defeat. All the chairs are filled with people watching anxiously for the next move. Sounds exciting? Well, that’s just a day in the life of the Video Game Club here at Holy Family University.

The Video Game Club is fairly new to HFU, but that has not limited their membership numbers. When it was established, students were overjoyed to have such an interesting stress reliever. An executive member, Saba Mufti, says, “I was jumping with joy when I learned that this club became established because I loved playing video games ever since I was a child. Having this club become a reality is a dream come true.”

The club has many general members, but a dedicated few are truly devoted to creating the welcoming home for everyone else. 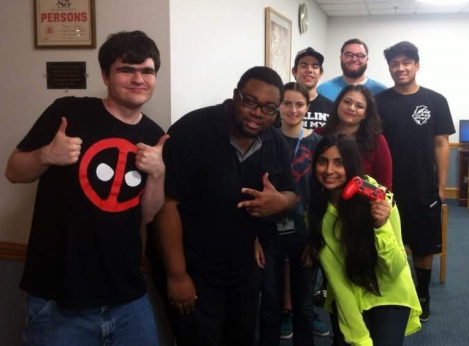 “The club makes its members feel like a family,” says Mufti.

The meetings are set up by the President, Vice President, and Secretary. According to Mufti, a typical meeting is a group get-together: “Since there are two TVs, each TV is used for two systems. One is mainly used for the PS4 and involves two players, while the other is mainly for the Nintendo Wii and involves up to four players. Then, every member takes turns to play the video games.”

A club such as this one is teaching its students how to cooperate and how to have a relief in the midst of studying. In the words of Kristina Colon, “If you are feeling stressed, need to kick back, relax and have fun, then the Video Game Club is the club for you! We meet every Wednesday and Friday during common hour, and typically play on two different consoles depending on how many members are present.”

The club has a variety of consoles in which members can engage, but newbies don’t have to be intimidated. Colon explains, “As a member of the video game club, we do not expect anyone to be experts at the game we play. The whole point of the club is just for everyone to have fun!”

There are some minor setbacks such as materials, recruitment, and location. Colon says, “I admit that we need to advertise and promote our club a lot more by holding more events, participating in open house and other club activities that will give our club more exposure.”

However, these obstacles don’t interrupt the fun and carefree atmosphere. The group has found innovative ways to raise money, such as participating in Holy Family events that offer spots to clubs and sports. Overall, this club has gone through trials to become official, but once they did, they never looked back. Looking in from the outside, the video game club has become a family within the family of HFU.